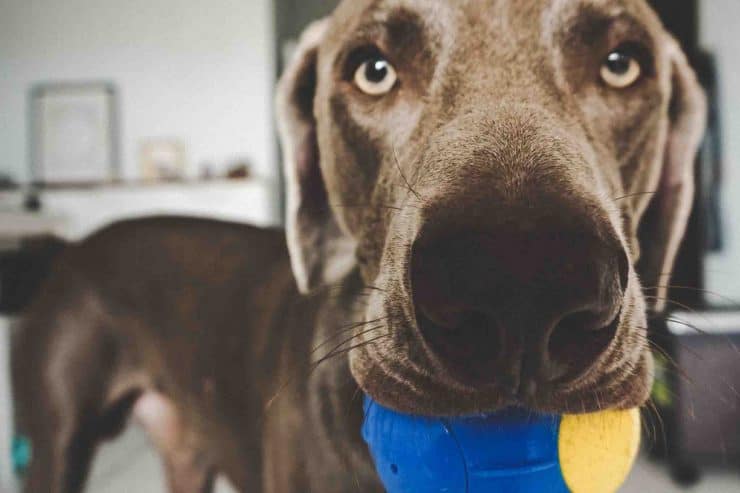 Teaching a dog to release an object from its mouth can literally be a lifesaver.

Teaching a dog to “drop it” is relatively easy.  It is also an invaluable tool to have at your disposal throughout a dog’s life.  Whether your dog is holding a piece of valued clothing in your home, or discarded chicken bones on a walk, the ability to have your dog release the item on command can be not only convenient, but potentially lifesaving.

Step One: Establish a transaction

Offer your dog a toy that it enjoys and will willingly take from you.  Let it hold the toy for 10-20 seconds, then offer the dog a treat — effectively in exchange for the toy.  As soon as the dog drops the toy for the treat, let her have the treat.  If she doesn’t drop the it, try using a less valuable toy — one she doesn’t love as much — or a more valuable treat!

Repeat this several times until the dog understands the basic transaction that is occurring.  It’s a pretty good deal for the dog — temporarily giving up it’s toy for a tasty treat.

Once the dog is consistently dropping the toy for the treat, start adding a command or other verbal cue.  Many use “drop it,” but as with all dog training, you can choose any command you want (dogs don’t know English) as long as you use it consistently and exclusively for that desired behavior.  It’s best to use unique words that aren’t easily confused with others.  For example, “drop it!” and “stop it!” can sound very similar to a dog, so if you choose to use “drop it,” don’t also use “stop it” as a command.

Say “drop it” clearly while holding the treat, and reward when they drop the toy, just as you have been doing.  Repeat this, incrementally holding the treat further and further from the dog’s mouth.  If the dog hesitates, repeat but with the treat slightly closer.

You are trying to teach the dog to recognize the verbal cue as part of the transaction.  The further away you are with the treat, the less inclined the dog will be to comply.

Once the dog is consistently engaging in the transaction when offered the treat from a few feet away, try giving the verbal command without offering a treat.  If the dog complies, praise her enthusiastically and repeat.

The goal here is to remove the food reward from the transaction.  You might want to include a treat every 2-3 commands to keep the dog interested and slowly wean them off their expectation of a treat.

Very soon, your dog will respond to your command without a treat.  Always praise the dog for complying, and try giving the command with different toys, balls, etc. and in different places in the house or outside.  You may have to reintroduce treats when training this behavior in these different contexts because, to the dog, this can feel like a totally new exercise.  Just proceed as before, and wean off treats as the dog’s response becomes more reliable.

Keep teaching and reinforcing this behavior in frequent, short sessions, and it will become second nature for your dog to drop it on command.  You can slowly up the value of the object it is holding, and, if necessary, introduce a higher value reward in order to teach it.

A great way to reinforce the behavior is to play a game of tug of war with the dog, and frequently stop engaging and give the “drop it” command.  The dog will quickly learn that the only way to start the fun game going again is to comply and wait for you to offer the tug.  You can get get lots of repetitions in and it becomes part of the game.

If a dog refuses to drop an object, never try to physically pry it from their mouth.  This can be very dangerous and result in a bite.  The best recourse in these situations is offer a more valuable reward — usually food.

Drop some treats on the floor next to the dog.  When the dog drops the object and goes for the treats, don’t reach for the object, but rather drop more treats further and further away, leading the dog away from the object.  You can then safely collect the object while the dog is focused on the treats.  Reaching for a coveted object in close proximity to the dog can result in a bite.  Of course, don’t allow the dog access to that object again, as you will most likely have the same predicament.

How to Teach Your Dog “Take It”

Teaching “drop it” is an excellent opportunity to also teach the “take it” command.  This is the opposite of “drop it” and instructs your dog to take an object from your hand or the ground on command.

Step One:  Establish the behavior and command

Hold your dog’s desired toy behind your back, say “take it”, and then quickly present the toy to them for play.  When they take it in their mouth, play tug with them — this rewards the behavior.

Then say “drop it” (or “give” or “let go” — whatever drop it command you have taught them) and praise them, immediately putting the toy behind your back.  You can give them a treat as well if you wish.

Repeat this procedure several times in a row.  As they learn what “take it” means, they are also practicing “drop it.”  Many dogs learn to love this game within the game — “take it/drop it.”

When the dog is reliably taking it after each command, try holding the toy within reach of the dog without giving the command.  If the dog goes for it (which he will most likely do the first few times), quickly pull it away and put it behind your back.

Present it again and repeat this step until the dog doesn’t immediately reach for it.  If he leaves it, say “take it,” and let him play.  Say “drop it” and repeat.

Keep practicing, but put the toy closer and closer to the dog’s mouth (where it’s more tempting for them to take it without being told).  If the dog cheats, just back up a step and keep working.

With practice, you will eventually be able to put the toy on the floor and have the dog wait for your command to pick it up, and then drop it on command.  Just don’t try to jump ahead too fast!  Only move forward if your dog is successful almost every time at a certain distance or level of temptation.

As with any trained dog behavior, remember to regularly practice so your dog will be reliable when the command is given. Fortunately, “drop it” can be incorporated into play, so this is easily done. Teach a dog to drop it, and it will be useful for your dog’s lifetime, perhaps even saving its life.

Kevin Ryan has trained dogs professionally for over 30 years, owned a pet store for 15 years, and has competed with his dogs in Agility on a national level.