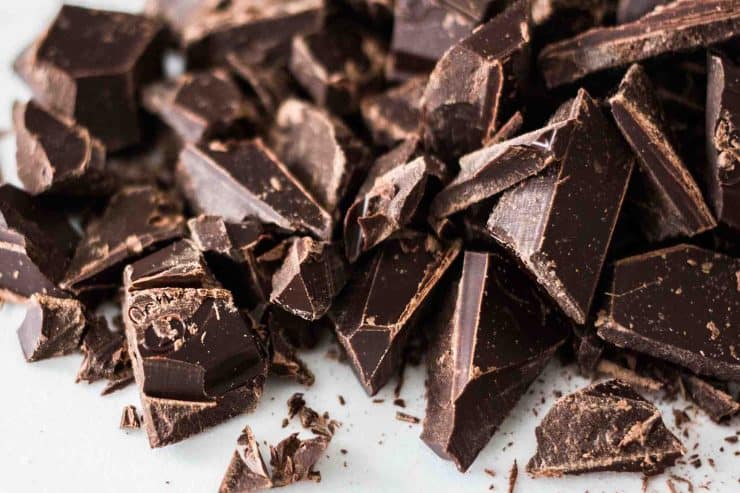 Human Foods That are Toxic to Dogs

We’ve all been there.  You’re snacking on a food, your dog approaches with interest, and you then have to decide whether to share a bit with your pup.  Or after dinner, you’re scraping plates into the trash, and you realize (with the help of your dog’s pleading expression) that they would probably enjoy what’s left of your meal.

The following list of foods toxic to dogs will help make your decision whether or not to share as your pup stares up at you with those longing eyes.

Probably the most well known no-no food for dogs, chocolate can be dangerous and even fatal if consumed in large enough quantities.  The toxic substance is theobromine, which like caffeine, is a methylxanthine.  Methylxanthines are alkaloids, which can be found in high concentrations in chocolate and coffee. Theobromine can cause diarrhea, vomiting, tremors, seizures, and even cardiac arrest, among other symptoms and complications.

The most dangerous chocolates are dark chocolate and unsweetened baking chocolate.  We recently heard a terrible story involving a dog on Christmas morning who discovered a stocking Santa left before the family’s children woke, and devoured all the chocolate inside.  Fortunately, the dog lived, but not after awful symptoms and an expensive Christmas visit to the emergency animal hospital.

Veterinarians will tell you that the most common times for chocolate-related incidents with dogs are around holidays like Christmas, Easter, and Valentine’s Day when chocolate is most present in homes.  So take extra care in these ties to keep it away from your dogs.

For the same reasons given above regarding chocolate, caffeine should be avoided for dogs.  The methylxanthines it contains can cause the same issues for your dog as the ones in chocolate do.  Caffeine is found in tea and chocolate products as well as coffee.

Little is known about what exactly in grapes and raisins causes toxicity to dogs, but the danger is certain.  An alarming number of illness, including cases of kidney failure in dogs have occurred as a result of eating grapes and raisins.  There is no data on how many grapes or raisins must be eaten before they pose a risk to a dog, but some cases have been reported citing as few as one.

Symptoms can include lethargy, vomiting, diarrhea, lack of appetite, depression, and difficulty urinating, and diagnoses can include renal failure.  Since so little is known about the actual cause of the toxicity, it is prudent to do your best to keep your dog from ingesting any grapes or raisins whatsoever.

The dangerous toxin to dogs in avocado is persin.  It can be found in the edible fruit as well as the seed (the pit), leaves, and bark of the avocado.  Along with its high fat content, ingesting avocados can cause vomiting and diarrhea.  In addition to not feeding your dog avocados, be careful that they don’t find them on the ground if you live in an area where they grow.

Also, because of its size and density, the avocado seed can be dangerous if swallowed by a dog.  Small enough to swallow for some dogs but often too big to pass through its digestive system, the avocado seed can cause an obstruction in the stomach or intestines, which can require emergency surgery or be fatal.

One of the most toxic foods for dogs are onions.  While it takes ingesting a fair amount of onions to prove fatal, they can cause weakness, respiratory problems, and vomiting.  This includes both raw onions (which fortunately most dogs won’t eat), cooked onions, chives and scallions, and garlic (fresh, cooked, or powdered).

Garlic is especially toxic to dogs when they chew it as it releases organosulfur compounds, which are easily absorbed by a dog’s intestinal tract, where they metabolize into highly reactive oxidants.

Onions and garlic can both kill red blood cells and cause anemia, so best to keep them all away from your dog.  Bonus:  it will also spare your pup having onion or garlic breath.

Xylitol, a very common artificial sweetener, is a risk to your dog’s health.  It can be found in a large variety of products, including gum, candy, mints, toothpaste, baked goods, and ice cream.

Ingesting Xylitol can cause insulin release, which can lead to liver failure.  This insulin increase leads to hypoglycemia

Initial symptoms include vomiting, stumbling, coordination issues, lethargy, and low energy as a result of low blood sugar.  Seizures can follow, and elevated liver enzymes and liver failure can follow within days after ingestion of Xylitol.

Chewing gum contains Xylitol (see above).  We mention gum separately because it’s such a common item that dogs often are able to find discarded on the ground or sitting on accessible furniture, etc.

While it seems perfectly natural to give your dog a hunk of raw meat, doing so can increase the risk of exposure to bacteria like E. coli and Salmonella.  These bacteria can cause stomach issues such as diarrhea and vomiting.

If you decide to feed your dog a raw diet, do your research and consult with a vet to avoid the risks of bacteria.

Some fish, including salmon and trout, can have a parasite that causes “fish disease.”  It’s killed by cooking the fish.

It’s tempting to share fat trimmed from meat, whether cooked or uncooked, with your pup.  They often find it so tasty.  But it can give your dog pancreatitis.

And while nothing seems as normal as giving a dog a bone, bones also present a serious risk to dogs.  Bones can splinter and create sharp points which can damage a dog’s gastrointestinal system or cause an obstruction.

Feeding your dog chips or other snacks and foods that contain a lot of salt is risky.  It increases thirst and thus excessive drinking and frequent urination, and excess salt can lead to sodium ion poisoning.  Symptoms include vomiting, diarrhea, tremors, fever, and seizures.  It should be treated by a vet immediately.

The meat of these fruits are fine; their pits/seeds, however, are dangerous as they can cause intestinal issues in dogs.  Peach and plum pits also have cyanide, which is poisonous.

The leaves and roots of the rhubarb plant contain soluble calcium oxalate crystals and oxalic acid which are toxic to dogs, so be careful if your dog has access to a garden where they are being grown.  Because the leaves are bitter in taste, most dogs won’t consume them, but there’s always a risk if they have access.  Poisoning can lead to excessive drooling, lethargy, weakness, tremors, bloody urine, and kidney failure

Can dogs eat apples?  Yes, but with one caveat.  Apple seed casings contain small amounts of cyanide.  Fortunately, your dog would have to digest a large amount of these seeds for them to have an adverse effect, and would have to chew the seeds rather than just swallowing them in order for the cyanide to be released into the bloodstream. But to be safe, if you’re going to give your dog apples, remove the core and seeds first.

Corn is generally safe for dogs to eat, but corn cobs are definitely not.  Dogs will wolf the cobs down, leaving large pieces in their stomach and gastrointestinal tract.  Unfortunately, they cannot be digested and remain as large objects, capable of causing bowel obstruction and major intestinal blockage, a potentially fatal condition.

Whether dogs are given corn cobs by their owners or they steal them from the trash or unattended plate, cobs pose a serious danger to dogs.  Corn cobs are one of the most common items removed from dogs’ stomachs by veterinarians.

If a dog eats bread dough before it rises, the dough can continue to swell inside the dog and create pain as it stretches the stomach.  It can also cause gas to build up in the dog’s digestive system, possibly leading to bloat.

There is a risk of alcohol poisoning as well with yeast dough as it produces ethanol and can inebriate a dog who has infested it.

Macadamia Nuts and Other Types of Nuts

Many nuts, including almonds, walnuts and pecans, are high in fat, which can cause . vomiting and diarrhea, and potentially pancreatitis in dogs.

Macadamia nuts are particularly dangerous to dogs as they are highly toxic and lethal, even if consumed in very small amounts.  Symptoms, which will usually appear within 12 to 48 hours of ingestion, include muscle shakes, vomiting, high fever, and weakened rear legs.

Allowing your dog to ingest alcohol is abusive.  Alcohol has similar effects on dogs as it does on humans; however, it takes much less alcohol to affect a dog and the threshold for poisoning is much lower.

Alcohol can cause vomiting and diarrhea as well as the same coordination, balance, and judgment issues that it does with humans. It can also cause tremors, breathing troubles, central nervous system depression, abnormal blood acidity, coma, and death.

Because the amount of alcohol needed to cause issues is so small, the risk of danger is high with dogs.  This risk becomes even higher with small dogs.

And medical risks aside, allowing your dog to get inebriated is unconscionable.  Unlike humans, who have the capacity to make the decision to get drunk, dogs are not capable of determining the risks or knowing the consequences of drinking alcohol.

If Your Dog Eats Any of These Foods, Speak with a Veterinarian

If your dog eats one of these dangerous foods, or your suspect that they have, it is a good idea to phone your vet and get their opinion.  And because we all know that our dogs generally do these things after normal vet office hours (it’s some kind of a canine law), always have the phone number of a nearby emergency animal hospital on hand as well as the 24-hour ASPCA Animal Poison Control Center (888-426-4435).  The Animal Poison Control Center charges $75 for their phone consultation, which may save you a trip to the emergency animal hospital (or let you know that you should go there as soon as possible).

While there are plenty of people foods that are perfectly safe for dogs to eat, there are more than a few human foods that are toxic to dogs and potentially cause mild, serious, or even fatal illnesses.  With no shortage of safe, quality foods and treats made specifically for dogs, there’s really no reason to risk sharing people food with them unless you have researched it.

Most dogs are just as happy eating a dog snack as they are a people snack.  So if you are ever in doubt about feeding a dog a particular human food, don’t!  The risk is not worth the convenience or temporary satisfaction of your dog.

Relationship Advice: 10 Signs Your Dog Isn’t Into You Anymore

What’s the Difference Between Puppy, Adult, and Senior Dog Food?